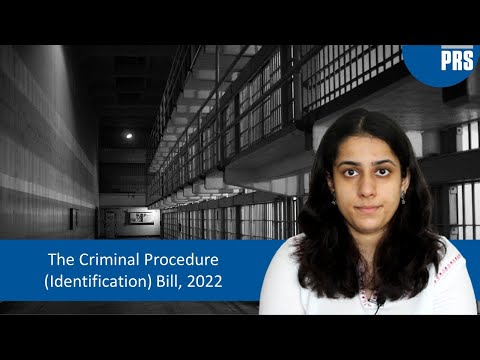 The Identification of Prisoners Act, 1920 allows police officers to collect certain identifiable information (fingerprints and footprints) of persons including convicts and arrested persons.[1]   Also, a Magistrate may order measurements or photographs of a person to be taken to aid the investigation of an offence.  In case of acquittal or discharge of the person, all material must be destroyed.

There have been advances in technology that allow other measurements to be used for criminal investigations.  The DNA Technology (Use and Application) Regulation Bill, 2019 (pending in Lok Sabha) provides a framework for using DNA technology for this purpose.[2]   In 1980, the Law Commission of India, while examining the 1920 Act, had noted the need to revise it to bring it in line with modern trends in criminal investigation.[3]   In March 2003, the Expert Committee on Reforms of the Criminal Justice System (Chair: Dr. Justice V. S. Malimath) recommended amending the 1920 Act to empower the Magistrate to authorise the collection of data such as blood samples for DNA, hair, saliva, and semen.[4]

The Criminal Procedure (Identification) Bill, 2022 was introduced in Lok Sabha on March 28, 2022.   The Bill seeks to replace the Identification of Prisoners Act, 1920.[5]

Key Features of the Bill

The Bill expands: (i) the type of data that may be collected, (ii) persons from whom such data may be collected, and (iii) the authority that may authorise such collection.  It also provides for the data to be stored in a central database.  Under both the 1920 Act and the 2022 Bill, resistance or refusal to give data will be considered an offence of obstructing a public servant from doing his duty.  Table 1 compares provisions of the 2022 Bill with the 1920 Act.

Bill may violate the Right to Privacy as well as Equality

The Bill permits the collection of certain identifiable information about individuals for the investigation of crime.  The information specified under the Bill forms part of the personal data of individuals and is thus protected under the right to privacy of individuals.  The right to privacy has been recognised as a fundamental right by the Supreme Court (2017).[6]  The Court laid out principles that should govern any law that restricts this right.   These include a public purpose, a rational nexus of the law with such purpose, and that this is the least intrusive way to achieve the purpose.  That is, the infringement of privacy must be necessary for and proportionate to that purpose.  The Bill may fail this test on several parameters.  It may also fail Article 14 requirements of a law to be fair and reasonable, and for equality under the law.[7]

The issue arises due to the fact that: (a) data can be collected not just from convicted persons but also from persons arrested for any offence and from any other person to aid an investigation; (b) the data collected does not need to have any relationship with evidence required for the case; (c) the data is stored in a central database which can be accessed widely and not just in the case file; (d) the data is stored for 75 years (effectively, for life); and (e) safeguards have been diluted by lowering the level of the official authorised to collect the data.  We discuss these issues below, and explore some of the consequences through a few examples.

Persons whose data may be collected

The Bill expands the set of persons whose data may be collected to include persons convicted or arrested for any offence.  For example, this would include someone arrested for rash and negligent driving, which carries a penalty of a maximum imprisonment of six months.  It also expands the power of the Magistrate to order collection from any person (earlier only from those arrested) to aid investigation.  This differs from the observation of the Law Commission (1980) that the 1920 Act is based on the principle that the less serious the offence, the more restricted should be the power to take coercive measures.3  Note that the DNA Technology (Use and Application) Regulation Bill, 2019 waives the consent requirement for collecting DNA from persons arrested for only those offences which are punishable with death or imprisonment for a term exceeding seven years.2

Persons who may order data to be collected

Under the 1920 Act, a Magistrate may order data to be collected in order to aid the investigation of an offence.1  The Law Commission (1980) remarked that the 1920 Act did not require the Magistrate to give reasons for his order.3  It observed that the ambit of the law was very wide (“any person” arrested in connection with “any investigation”), and refusal to obey the order could carry criminal penalties.  It recommended that the provision be amended to require the Magistrate to record reasons for giving the order.  The Bill does not have any such safeguard.  Instead, it lowers the level of the police officer who may take the measurement (from sub-inspector to head constable) and also allows the head warder of a prison to take measurements.

What data may be collected

The Bill widens the ambit of data to be collected to include biometrics (finger prints, palm prints, foot prints, iris and retina scan), physical and biological samples (not defined but could include blood, semen, saliva, etc.), and behavioural attributes (signature, handwriting, and could include voice samples).   It does not limit the measurements to those required for a specific investigation.  For example, the Bill permits taking the handwriting specimen of a person arrested for rash and negligent driving.  It also does not specifically prohibit taking DNA samples (which may contain information other than just for determining identity).  Note that under Section 53 of the Code of Criminal Procedure, 1973, collection of biological samples and their analysis may be done only if “there are reasonable grounds for believing that such examination will afford evidence as to the commission of an offence”.[8]

The Bill makes an exception in case of biological samples.  A person may refuse to give such samples unless he is arrested for an offence: (i) against a woman or a child, or (ii) that carries a minimum punishment of seven years imprisonment.  The first exception is broad.  For example, it could include the case of theft against a woman.  Such a provision would also violate equality of law between persons who stole an item from a man and from a woman.

The Bill allows retaining the data for 75 years.  The data would be deleted only on the final acquittal or discharge of a person arrested for an offence.  The retention of data in a central database and its potential use for the investigation of offences in the future may also not meet the necessity and proportionality standards.

The examples below illustrate some of the consequences of the provisions of this Bill.

Illustration 1.  Person W is found guilty of rash and negligent driving (and fined Rs 1,000).  He may have his signature collected and stored in a central database for 75 years.   The Bill permits this.

Illustration 2.  Person X is arrested for an offence.  He refuses to give his fingerprints.  He is charged with preventing a public servant from performing his duty (Section 186 of the Indian Penal Code, 1860).  His fingerprints are forcibly taken under both cases.  He is subsequently discharged from the original case.  However, as he is guilty under Section 186 of the Indian Penal Code in the second case, his fingerprints can be stored for 75 years.[9]  This implies that anyone who is arrested for any offence and refuses to give measurements can have their data stored for 75 years, even if they are acquitted in the main case.

Illustration 3.  Person Y is arrested.  The case goes on for 20 years through several appellate levels (this is not unusual).  His records will remain in the database for this period.  He gets acquitted.  He is arrested in another case just before the final acquittal in the first case.  The records can be kept in the database until the second case is decided.  This process can be continued through a third case and so on.

Illustration 4.  Person Z defies Section 144 orders under the Code of Criminal Procedure, 1973 (unlawful assembly) and is arrested.  His fingerprints are taken (the Bill does not require a connection between the measurement and the evidence needed for investigation).[10]  He is found guilty under Section 188 of the Indian Penal Code (disobeying an order of a public servant) and fined Rs 200.[11]  His fingerprints will be in the database for 75 years.