The DNA Technology (Use and Application) Regulation Bill, 2018 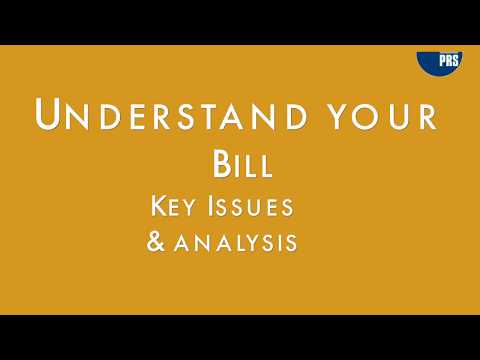 The Deoxyribonucleic Acid (DNA) is a set of instructions found in a cell.  These instructions are used for the growth and development of an organism.  The DNA of a person is unique, and variation in the sequence of DNA can be used to match individuals and identify them.[1]  DNA technology, therefore allows for accurate establishment of an individual’s identity.1

DNA-based technology can be used to aid criminal investigations.  For example, the identity of a criminal offender may be determined by matching DNA found at the crime scene with the DNA of a suspect.[2]  In addition, DNA-based technology helps in identification of victims in the event of terrorist attacks or natural disasters such as earthquakes.  For example, DNA technology has been used to identify victims of terrorist attacks on the World Trade Centre in 2001, and disasters such as the Asian tsunami in 2004.[3]  Further, DNA profiling can be used in civil matters, such as parentage related disputes.

Bill may cover DNA technology for medical or research purposes

The Long Title of the Bill states that its purpose is to regulate the use of DNA technology to identify criminal offenders, victims, missing, and deceased persons.[5]  However, the Bill also allows the use of DNA technology for certain civil matters specified in the Schedule.  These include matters such as parentage disputes, pedigree, immigration or emigration, assisted reproductive technologies, and transplantation of human organs.  In particular, the Schedule includes DNA testing for issues relating to establishment of individual identity.

Inclusion of civil matters in the Bill

Consent of individual not specified for DNA profiling in civil matters

The Bill requires consent of an individual when DNA profiling is used in criminal investigations or identifying missing persons.  Victims of a crime as well as individuals arrested for the crime, must give their written consent before their DNA sample is collected.  However, such consent is not required in case of DNA profiling for civil matters.

If DNA profiles related to civil matters were to be stored in the DNA Data Banks, there may be a violation of the right to privacy.  The Supreme Court has interpreted the Constitution to include right to privacy as a fundamental right.[6]  It states that this right may be infringed only if three conditions are met.  These conditions are: (i) there must be a law, (ii) the law must aim to achieve a public purpose, and (iii) the public purpose must be proportionate to the infringement of privacy.6  Since the storage of DNA profiles for civil matters (such as paternity suits) in the Data Banks may not serve a public purpose, it may violate the right to privacy.

DNA profile may include information other than identification

While DNA can establish the identity of a person, its analysis can also reveal information related to his medical and physical characteristics, which could affect his privacy.1,2,3  For this reason, DNA profiling to establish the identity of a person is done using a specific portion of the DNA that does not reveal any additional information about the individual.  This practice is followed in several countries including the United States of America and United Kingdom.[7],[8]  Laws in countries such as South Africa and Ireland specify that the DNA profile will not contain information related to medical or physical characteristics of the individual.[9],[10]  Note that the Law Commission in its report on the draft Bill of 2017, stated that only the portion of the DNA which provides information on identity will be used for profiling.2  However, this is not specified in the Bill.

Removal of profiles related to missing persons only on written request

The Bill states that the Director of the National DNA Data Bank must remove the profile of a suspect following the filing of a police report or a court order.  Similarly, the profile of an undertrial must be removed following a court order.  However, the profiles of individuals in the missing persons’ index are removed on the basis of a written request to the Director.  It may be argued that in addition to a written request, these profiles may be removed once the case is closed by the police.  Further, the Bill does not provide for removal of DNA profiles of unknown deceased persons.

No requirement for DNA laboratories to remove profiles

No mechanism for grievance redressal for removal of profiles

Written consent for collecting DNA samples on arrest may be inadequate

If a person is arrested for an offence that carries punishment up to seven years, investigation authorities must take his written consent before taking his DNA sample.  However, the Bill does not include safeguards to ensure that the consent is voluntary.  In some other procedures, such as that of obtaining a confession for a crime, the Code of Criminal Procedure, 1973, provides a safeguard that the statement is made to a Magistrate (not the police).[11]

Collection of DNA samples from photograph or video is unclear

DNA profiles are prepared from DNA samples collected from individuals.  The Bill provides a list of sources for collection of samples for DNA profiling.  This includes biological substances such as blood sample, hair, and mouth swab.  However, the Bill also lists photographs or video recording of body parts as a source for sample collection.  It is unclear how a DNA sample can be collected from a photograph or video recording.

Comparison of fingerprints and DNA profiling

Currently fingerprinting is used for the purpose of establishing the identity of a person charged with a criminal offence.  However, the regulations governing the use of fingerprinting and the provisions related to DNA profiling under the Bill are different.  For example, fingerprints can be taken for offences with punishment of rigorous imprisonment of at least one year or more, while there is no minimum threshold of offences for collecting DNA samples.  Table 2 below compares the regulations related to fingerprinting with the provisions of the Bill.

Table 2: Comparison of fingerprint law with the Bill

Sources: The Identification of Prisoners Act, 1920; The DNA Technology (Use and Application) Regulation Bill, 2018; PRS.

The table below compares provisions of the DNA Technology (Use and Application) Regulation Bill, 2018 with the DNA laws of other countries.

[*] For example, breast cancer can be diagnosed by analysing mutations in the BRCA1 gene.  This test involves analysis of large parts of the DNA, which could provide enough information to identify an individual.

[2]. “Report No. 271: Human DNA Profiling- A draft Bill for the Use and Regulation of DNA-Based Technology”, Law Commission of India, July 2017, http://lawcommissionofindia.nic.in/reports/Report271.pdf.

[3]. “Nothing to Hide, nothing to fear?”, Human Genetics Commissions, United Kingdom, November 2009.

[4]. Statement of Objects and Reasons, DNA Technology (Use and Application) Regulation Bill, 2018.