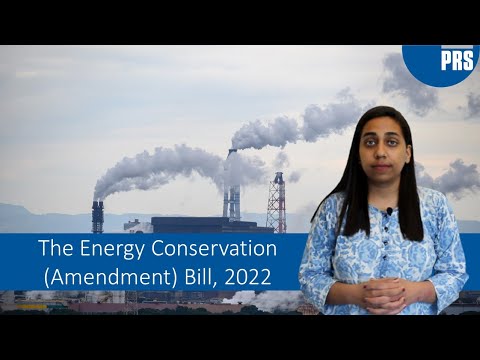 The Energy Conservation Act, 2001 provides a framework for regulating energy consumption and promoting energy efficiency and energy conservation.[i]  Energy efficiency means using less energy to perform the same task.  The Act has set up the Bureau of Energy Efficiency to recommend regulations and standards for energy consumption.  These apply to appliances, vehicles, industrial and commercial establishments and buildings.  Efforts towards energy conservation and efficiency gains are among the key instruments envisaged for climate change mitigation.  Efforts on these fronts lower the energy generation requirement, and thereby reduce greenhouse gas emissions.  These also have positive implications for energy security in a country like India, which relies on imports to meet some of its energy needs.[ii]  As per an estimate by the Bureau, programs for efficient energy use have helped India save about 28 million tonnes of oil equivalent energy in 2019-20 (this amount of energy could light about 185 crore 20W LED bulbs 24X7 for a year).[iii]

During the COP-26 summit in 2021, India made the following commitments which may be relevant for energy efficiency efforts: (i) reducing total projected carbon emissions by one billion tonnes by 2030, and (ii) reducing the carbon intensity of the economy by 45% by 2030 over 2005 levels.[iv]  Carbon intensity is defined as the volume of carbon emissions per unit of GDP.  In addition, India aims to have 500 GW of non-fossil energy capacity and meet 50% of its energy requirements from renewable energy by 2030.3  Against this backdrop, the Energy Conservation (Amendment) Bill, 2022 was introduced in Lok Sabha in August 2022.[v] The Bill was passed by Lok Sabha and is currently pending before Rajya Sabha. The Bill seeks to amend the 2001 Act to: (i) facilitate the achievement of COP-26 goals, and (ii) introduce concepts such as mandated use of non-fossil sources and carbon credit trading to ensure faster decarbonisation of the Indian economy.

The Bill empowers the central government to specify a carbon credit trading scheme.  Carbon credit refers to a tradeable permit allowing the holder to emit a specified amount of carbon dioxide or other greenhouse gases such as methane and nitrous oxide.  These may be earned by reducing emissions for a given activity or creating sinks for carbon absorption such as forestry.  Carbon credits may be purchased by an entity that emits above its specified amount.  A carbon credit trading scheme is aimed at reducing greenhouse gas emissions, and hence, addressing climate change.  We discuss certain issues with the provisions of the Bill below.

As per the Act, the Ministry of Power will be the nodal Ministry for the regulation of the scheme, and the Bureau of Energy Efficiency under the Ministry of Power will be the implementing agency.  As per the Government of India (Allocation of Business) Rules, 1961, the Ministry of Power is responsible for: (i) general policy in the power sector, and issues related to energy policy and coordination, and (ii) energy conservation and energy efficiency pertaining to the power sector.[vi]   The energy sector is the major contributor to greenhouse gas emissions in India (about 75% in 2016).[vii]   However, the ambit of carbon credit trading could be wider than the energy sector.  Activities such as agriculture (14%) and industrial processes (8%) also make sizeable contributions to greenhouse gas emissions (see Table 1 on next page).7  In addition, the land use, land-use change, and forestry sector is the main sector providing a net carbon sink, i.e., it absorbs greenhouse gases.7  In 2016, this sector absorbed about 11% of the greenhouse gases emitted by other sectors on a net basis.7

Under the Business Allocation Rules, it is the Ministry of Environment, Forest, and Climate Change, which is responsible for the regulation of: (i) ‘climate change and related matters’, (ii) environmental norms, and (iii) forestry.6  In jurisdictions such as USA, UK, and Switzerland, the Environment Ministry or Environment Regulator implement schemes similar to the one proposed by the Bill (referred to as emission trading or cap-and-trade schemes).[viii],[ix],[x]

No clarity on who will regulate the carbon credit market

Typically, trading platforms are regulated by respective sectoral regulators.  For example, share and commodity trading is regulated by the Securities and Exchange Board of India (SEBI).[xi]  Electricity trading is regulated by Central Electricity Regulatory Commission (CERC).[xii]  The regulating entities for trading have been specified in respective Acts.  The Bill does not give clarity on how carbon credit certificates will be traded, or who will regulate such trading.  The question is if there were to be a regulator, should it be specified in the Act itself.

Note that the Energy Conservation Act provides for energy savings certificates.[xiii]  The Act does not specify the regulator for the trading of these certificates.  These certificates are traded on power exchanges, which are in turn regulated by CERC.[xiv],[xv]

The Bill adds that the government may require certain designated consumers to meet a minimum share of energy consumption from non-fossil sources.   Different consumption thresholds may be specified for different non-fossil sources and consumer categories.   Designated consumers include: (i) industries such as mining, steel, cement, textile, chemicals, and petrochemicals, (ii) transport sector including Railways, and (iii) commercial buildings, as specified in the schedule.  Failure to comply will be punishable with a penalty of up to Rs 10 lakh.  Electricity is a key form of energy used across consumer categories.  Currently, most consumers may not have an option to buy electricity produced from a specific source.  Possible sources for a consumer to meet electricity needs could be: (i) supply from a power distribution company (discom), (ii) direct procurement from a generator, or (iii) captive generation (generating on their own).

Choice in the energy mix of supply from discom:  Typically, commercial establishments like a hotel in Delhi will be procuring energy from the discom of the area.  Under the Bill, an obligation may be cast upon it to procure electricity from non-fossil sources.  Power supply in an area is often a monopoly, that is, only one discom supplies electricity to all consumers in an area.  The hotel may not have control or choice over the mix of electricity it is buying, since the energy mix is decided by the discom.

Difficulties with open access:  Amendments to Electricity Rules notified in June 2022 have allowed consumers with a minimum load of 100 kW to procure green energy from a generator of their choice (called open access).[xvii]  The earlier threshold was 1 MW.  As per these Rules, green energy includes renewable energy such as solar, wind, and hydro, and green hydrogen and green ammonia.  However, the Ministry of Power had informed the Standing Committee on Energy (2022) that in most states, open access is not really a possibility for consumers as Regulatory Commissions have stipulated high open access charges.[xviii]

There may not be a widespread generation of power from some of these sources that the consumer can access.  For instance, the share of biomass in India’s total installed electricity generation capacity was 2.5%, as of August 2022.[xix]  Technologies such as green hydrogen and green ammonia are still at a nascent stage.3  Currently, it may not be feasible to produce energy from them affordably.  Also, energy is a key input to industrial activity, and such an obligation may then adversely impact the competitiveness of the industry.

The Electricity Act, 2003 uses a different approach to promote the use of renewable energy.   It mandates discoms, who are bulk-procurers from generators and suppliers to end-consumers, to procure a certain percentage of energy from renewable sources

[vi]. The Government of India (Allocation of Business) Rules, 1961.

[xi]. The Securities and Exchanges Board of India Act, 1992.

[xv]. PAT Scheme, Website of Bureau of Energy Efficiency as accessed on August 4, 2022.

DISCLAIMER: This document is being furnished to you for your information.  You may choose to reproduce or redistribute this report for non-commercial purposes in part or in full to any other person with due acknowledgement of PRS Legislative Research (“PRS”).  The opinions expressed herein are entirely those of the author(s).  PRS makes every effort to use reliable and comprehensive information, but PRS does not represent that the contents of the report are accurate or complete.  PRS is an independent, not-for-profit group.   This document has been prepared without regard to the objectives or opinions of those who may receive it.