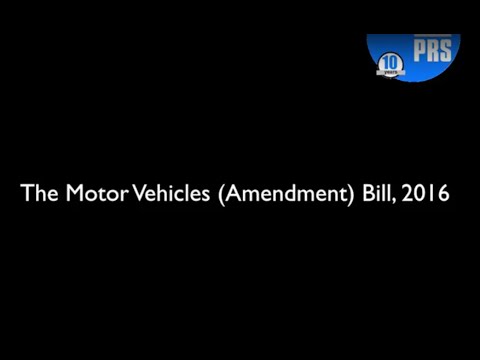 An increase in the number of vehicles on roads, along with the absence of a coordinated policy to control the problem has been attributed to an increase in the number of road accidents.2  With the number of road accidents increasing, the Ministry of Road Transport and Highways appointed the Committee on Road Safety in 2007 (Chair: Mr. S. Sundar) to examine the magnitude of road traffic injuries and fatalities.  The Committee recommended setting up road safety authorities (at both national and state levels).[6]  In April 2016, the central government constituted a group of state transport ministers (Chair: Mr. Yunus Khan, Minister for Transport, Rajasthan) to recommend reforms for the road transport sector.  The group recommended that the Motor Vehicles Act, 1988 be amended to address urgent issues related to road safety.

The Motor Vehicles (Amendment) Bill, 2016 was introduced in Lok Sabha on August 9, 2016 by the Minister of Road Transport and Highways, Mr. Nitin Gadkari.  The Bill seeks to amend the Motor Vehicles Act, 1988.  The Motor Vehicles Act, 1988 is the primary central legislation that regulates the licensing and registration of motor vehicles, and drivers.  The Bill seeks to address various issues such as road safety, third party insurance, regulation of taxi aggregators, recall of unsafe vehicles, and compensation for victims in case of road accidents.

Table 1: Compensation for motor accidents under the 1988 Act and 2016 Bill

Third party insurance is the liability purchased from an insurer (insurance company) by person A (insured party) to protect himself against claims from person B (third party), in the event of death, injury, or damage to property.  Under the 1988 Act, third party insurance is compulsory for all motor vehicles and the liability of the third party insurer is unlimited.  This means that the insurer has to cover the entire amount of the liability incurred (compensation), as decided by the courts.  Currently, compensation amounts are calculated by courts on the basis of several factors such as age, earning capability of the victim, and may go up to several crore rupees.[7]

The Bill caps the maximum liability for third party insurance in case of a motor accident at Rs 10 lakh in case of death and at five lakh rupees in case of grievous injury.  This implies that the insurance company is liable to pay only up to these specified amounts.  However, the Bill does not cap the compensation amount to be decided by the courts.  If courts award compensation amounts higher than the maximum liability prescribed under the Bill, it is unclear who will pay the remaining amount.  Possible scenarios that may arise are presented in Table 2 below.

Table 2: Situations arising out of limited liability if compensation awarded by the court is higher than Rs 10 lakh (maximum liability under the 2016 Bill)

Currently with unlimited liability, and compensation amounts increasing in the recent years, insurance companies have been reporting losses in the third party insurance business.[9]  In response, insurance premiums are being increased regularly.  For the year 2016-17, Insurance Regulatory and Development Authority proposed to increase the premium for four wheeler vehicles by 50% to 83% over the earlier rates (depending on engine capacity).[10]  Setting a cap on the insurer’s liability may help limit such increases in the motor accident insurance premiums in the future.  The Standing Committee examining the 2016 Bill recommended deleting the provision relating to capping of liability.[11]

Note that other transport laws in India provide for caps on the compensation amount in case of death or injury.  For example, under the Carriage by Air Act, 1972, the limits in case of death or bodily injury is SDR 113,100 (about Rs 1.02 crore based on the exchange rate on March 3, 2017).[12]  The Railway Accidents and Untoward Incidents (Compensation) Rules, 1990 specifies the compensation amount at four lakh rupees in case of death, and between Rs 32,000 and four lakh rupees in case of an injury (depending on the type of injury).[13]  Some countries such as the UK, cap liability for third party insurance, and allow motor vehicle owners to buy additional insurance at an additional premium.[14]

With a fund existing for hit and run cases, need for a new fund is unclear

Lack of clarity on central guidelines for aggregator companies

The Bill defines aggregators as digital intermediaries or market places which can be used by passengers to connect with a driver for transportation purposes (taxi services).  State governments will issue licenses to aggregators in conformity with guidelines issued by the central government.  However, the Bill does not specify what these guidelines will cover.

Currently, all taxi permits (including aggregators, radio taxis) are issued by state transport authorities.  The 1988 Act allows the state transport authorities to attach additional conditions to these permits, such as the rate of fare, the maximum number of passengers, the requirement of meters in taxis, etc.  In accordance with this, states have framed their own guidelines for taxi operations.  For example, Delhi has the Delhi Radio Taxi Scheme, 2006, Karnataka has implemented the Karnataka Motor Vehicles Rules, 1989, etc.[15],[16]  Recently, Maharashtra released the draft Maharashtra State Taxis Rules, 2016.  These Rules provide guidelines on various aspects of aggregator services including operational infrastructure, vehicle profile, driver’s profile, grant of licenses, and taxi fare.[17]

Penalties have been prescribed, without specifying the offences

The Bill allows the central government to make a scheme for providing interim relief to claimants seeking compensation under third party insurance for motor vehicle accidents.  The scheme will also provide for the procedure to recover funds disbursed under such scheme from the owner of the motor vehicle involved in the accident.  Any contravention of any provision of the scheme may be punishable with imprisonment of up to two years, or with a fine between Rs 25,000 and five lakh rupees.  While the Bill specifies penalties for contravening provisions of this scheme, it does not specify the offences that would warrant such penalties.

This implies that the government through a notification for the scheme may specify the offences which would carry these penalties.  The question is whether it is appropriate to delegate the function of specifying offences to the executive.

States must provide for electronic monitoring of road safety

The Bill mandates state governments to ensure electronic monitoring and enforcement of road safety on National Highways, State Highways, and urban roads as per guidelines framed by the central government.  It is unclear who will bear the cost of implementing such safety measures.

Ensuring electronic monitoring across roads in a state could incur a significant amount of infrastructure investment on part of the states (such as CCTV cameras, speed detectors, training programmes, etc.).  The Bill does not specify whether such costs will be borne through a central scheme or through additional grants to the states from the centre.  The financial memorandum of the Bill also does not provide for any financial support to states to implement such infrastructure.  The Standing Committee examining the 2016 Bill recommended that the central government should help states with the technical expertise, and logistics to make roads safer.11

Other issues around road safety

No agency responsible for road safety

The Sundar Committee on Road Safety had observed that the existing institutions in India do not have the required capacity to look into road safety.6  The responsibility for road safety is diffused across various bodies, and there is no effective coordination mechanism between these bodies.  Further, the National Road Safety Council does not have the adequate statutory backing, resources, or the mandate to affect road safety.  In comparison, other countries such as the US, Australia, and Sweden have national government agencies responsible for traffic safety and management.6

The Sundar Committee had recommended setting up Road Safety and Traffic Management Boards at the national and state levels.  These authorities would: (i) set standards and conduct audits with regard to roads, (ii) prescribe vehicle safety features, (iii) conduct road safety research, and (iv) recommend guidelines with regard to driver licensing and vehicle registration.  The current 2016 Bill does not provide for any agencies that are specifically responsible for road safety.  The Standing Committee examining the 2016 Bill recommended setting up a high powered road safety board with representatives from both central and state governments.11

Reporting of road accidents may be erroneous

In India, about 77% of the accidents are reported to have been caused due to the driver’s fault.[19]  Other factors responsible for road accidents include fault of drivers of other vehicles, defect in condition of motor vehicle, fault of pedestrian, weather conditions, faulty road engineering, etc.  The Standing Committee on Transport had observed that the majority of accidents being caused due to driver’s fault may be erroneous.[20]  This could be due to wrong or under reporting of such accidents.

The Ministry of Road Transport and Highways adopted a standardised accident recording form in February 2017.[21]  The form will capture information such as: (i) accident identification/location, (ii) road conditions such as gradient, potholes, (iii) details of the vehicles involved, (iv) victim details, and (v) traffic violations.

The National Transportation Development Policy Committee had noted that badly designed roads should be held responsible for road accidents instead of bad drivers.2  It had recommended that road design should be such that it corrects driver behaviour towards safer alternatives.  Other countries, such as Sweden and Australia, recognise that humans will make errors, and therefore focus on designing road transport systems which minimise the opportunity for human error.2

[1].  This Brief has been written on the basis of the Motor Vehicle (Amendment) Bill, 2016 which was introduced in Lok Sabha on August 9, 2016.  The Bill was referred to the Standing Committee on Transport, Tourism, and Culture on August 16, 2016.

[3].  Table No 20.1: Number of motor vehicles registered in India, Statistical Yearbook of India 2016, Ministry of Statistics and Programme Implementation.

[6].  Report of the Committee on Road Safety and Management, February 2007, http://morth-roadsafety.nic.in//admnis/admin/showimg.aspx?ID=29.