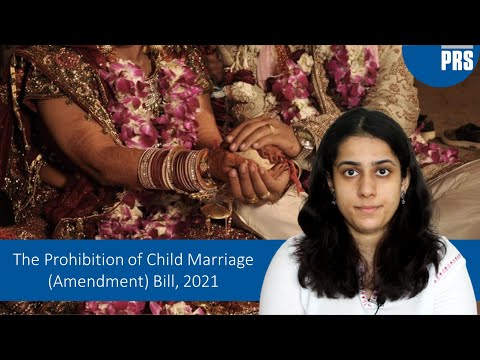 In June 2020, the central government set up a task force (Chairperson: Ms Jaya Jaitly) to examine the correlation of age of marriage and motherhood with: (i) health, medical well-being, and nutritional status of mother and child, during pregnancy, birth and thereafter, (ii) key parameters such as Infant Mortality Rate (IMR), Maternal Mortality Rate (MMR), Total Fertility Rate (TFR), Sex Ratio at Birth (SRB), Child Sex Ratio (CSR), and (iii) any other relevant points pertaining to health and nutrition in this context.[4]  The Task Force was also required to suggest measures for promoting higher education among women.  According to news reports, the Committee submitted its report in December 2020, where the suggestion to increase the age of marriage for females to 21 was made.[5]  However, the report of the task force is not available in public domain.

Different age for attaining majority and being allowed to marry

The Bill increases the minimum age of marriage for females to 21 years, bringing it on par with that for males.  However, the age of attaining majority is 18 years under the Majority Act, 1875.  This difference may have consequences regarding the rights and responsibilities of persons between 18 and 21 years of age.

Prohibiting marriages between the ages of 18 and 21 years

There are inconsistencies between the minimum age for marriage and certain decisions of the Supreme Court.  In 2018, the Supreme Court said that right to marry is part of right to life under Article 21 of the Constitution.[6]  It stated that the right cannot be taken away except through a law which is substantively and procedurally fair, just, and reasonable.6  In another case in 2018, the Court held that when two adults consensually choose each other as life partners, it is a manifestation of their choice, which is recognised under Articles 19 and 21 of the Constitution.[7]  The Bill restricts the right to marry before the age of 21 years.  The question is whether this restriction for those between the ages of 18 and 21 years meets the standards of reasonable restrictions as explained by courts.  In general, for any restriction of fundamental rights by law, there needs to be three criteria: a public purpose, the restriction having a nexus with such purpose, and absence of a less intrusive way to achieve the purpose.[8]

In 2018, the Supreme Court, while reading down Section 377 of the Indian Penal Code, 1860, ruled that consensual sex between consenting adults is a fundamental right under Articles 14, 15, 19 and 21 of the Constitution.[9]  If this Bill were passed, it would be legal to have sexual relations but illegal to marry for those between the ages of 18 and 21 years.  Note that this is the current status for males.

Implementation challenges of the 2006 Act

The minimum age of marriage for females has been 18 years since 1978.   However, according to NFHS-5 (2019-21), the prevalence of under-age marriages remains high, with 23% of women between 20 and 24 years of age married before the age of 18.  At the same time, the detection of such marriages remains low, with only 785 cases registered under the law in 2020.[11]  This shows that there has been limited success in curbing marriage of girls below the age of 18 years.  This raises the question of whether the increase in the minimum age would have any significant impact in reducing child marriages.

According to UNICEF, while the roots of the practice of child marriage vary across countries and cultures, poverty, lack of educational opportunities, limited access to health care, and poverty perpetuate it.[12]   In March 2020, the Minister of Women and Child Development informed Lok Sabha that the practice of child marriages is largely due to the prevailing social customs, tradition, illiteracy, poverty, low status of women in society, and lack of awareness.[13]   The Minister said that these issues cannot be tackled by legislative interventions alone.13

Objects and Reasons of the Bill

According to the statement of objects and reasons (SOR) of the Bill, increasing the age of marriage will help in achieving various goals including improvement of maternal and infant mortality rates (IMR and MMR), nutrition levels, sex ratio at birth (SRB), female labour force participation, and gender equality, and will lead to empowerment of women.

LFPR is defined as the percentage of the population who are employed or are looking for work.  According to the Annual Periodic Labour Force Survey 2019-20, the LFPR for women between 15-59 years was 32.3% (much lower than 81.2% for men).[18]  As per the International Labour Organisation (ILO), there are various economic and social factors that affect the LFPR.  These include: (i) educational attainment, (ii) fertility rates and age of marriage, (iii) economic effects, (iv) social norms, and (v) urbanisation.  Further, the ILO states that in India, the reasons for a low LFPR mostly include lack of employment opportunities, effect of rising household income, mismeasurement of women’s participation in the labour force, and increased enrolment in secondary schooling.[19],[20].

The table below provides recommendations by various national and international Committees and Conventions on age of marriage.

Table 2: Recommendations by various Committees and Conventions on minimum age of marriage

The Hindu Marriage Act, 1955, codifies the law relating to marriage among Hindus.  It permits a woman to file a petition for divorce if she was married before the age of 15 years and she repudiated the marriage before she turned 18.   The Bill amends the 1955 Act to increase the maximum age till which the wife can repudiate the marriage to 21 years.   However, the Bill also amends the Prohibition of Child Marriage Act, 2006 to allow annulment of marriages till the age of 23 years. Note that annulment implies that a marriage was entirely void, and hence was never valid, which is different from obtaining a divorce by repudiating the marriage.

[17]. Risk of maternal mortality in women with severe anaemia during pregnancy and post partum: a multilevel analysis, The Lancet, May 1, 2018.

[19]. Women’s labour force participation in India: Why is it so low?, International Labour Organisation, 2014.

[21]. General comment No. 20 (2016) on the implementation of the rights of the child during adolescence, United Nations Convention of Rights of the Child, December 6, 2016.

[23]. Report on Proposal to amend the Prohibition of Child Marriage Act, 2006 and other allied laws, Law Commission of India, February 5, 2008.

DISCLAIMER: This document is being furnished to you for your information.   You may choose to reproduce or redistribute this report for non-commercial purposes in part or in full to any other person with due acknowledgement of PRS Legislative Research (“PRS”).  The opinions expressed herein are entirely those of the author(s).  PRS makes every effort to use reliable and comprehensive information, but PRS does not represent that the contents of the report are accurate or complete.  PRS is an independent, not-for-profit group.  This document has been prepared without regard to the objectives or opinions of those who may receive it.