The Registration of Marriage of Non-Resident Indian Bill, 2019 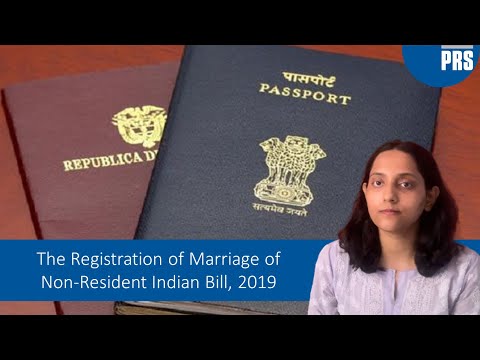 An NRI is defined as an Indian citizen who resides outside of India.  Unlike other laws, the Bill does not specify the minimum number of days abroad to qualify as an NRI.

In India, a marriage certificate is proof that two individuals are married to one another and therefore allows them to claim various rights related to the marriage.  If the marriage is not registered it may be difficult to prove its validity.  All states have passed laws making it compulsory to register marriages that occur within the state.[1]  However, there is no central law requiring registration of marriages of NRIs solemnised outside India.

The Standing Committee on the Empowerment of Women (2007) and the Law Commission of India (2009) have recommended that registration of marriage for NRIs be made mandatory.[2],[3]  They pointed out that failure to register a marriage can affect issues including those related to child custody, divorce proceedings initiated in a foreign country, or to instances where a spouse is previously married.2

The Registration of Marriage of Non-Resident Indian Bill, 2019 was introduced in Rajya Sabha on February 11, 2019.  It was referred to the Standing Committee on External Affairs and the Committee was scheduled to submit its report in May 2019.

No extension period in cases of delay in registering of marriage

Note that, various states have enacted laws for compulsory registration of marriage.  While states such as Karnataka and Gujarat provide for a 30 day time limit, they allow late registration on payment of late fees.[4]  There may be cases where NRIs are unable to register the marriage due to legitimate reasons within the 30 day limit.  The Bill does not envisage redressal for such persons.  Note that the penalty for not registering marriage within the time limit is the impounding of the passport, which may have significant consequences such as deportation or loss of employment abroad.

The Bill adds a section to the CrPC that specifies procedures for uploading of summons and warrants on a website, if the court is of the opinion that the summons could not be served to an individual.  This provision is not restricted to registration of marriages by NRIs; it applies to all matters under the CrPC.  For example: this provision would address summons and warrants issued for other offences such as theft, embezzlement, domestic violence, and traffic violations.  It is unclear why this provision is part of the current Bill.

Definition of Non-Resident Indian is unclear

The Bill defines a Non-Resident Indian as an Indian citizen who resides out of India.  However, it does not specify the number of days that an individual must stay outside India to be designated an NRI.  Therefore, it is unclear who the Bill would apply to.  For example, it is not clear whether an Indian citizen who fails to register his marriage during a two-month visit abroad, would face penalties under the Bill.  Note that under the Income Tax Act, 1961, the Foreign Exchange Management Act, 1999, and the Aadhaar Act, 2016, non-residents are defined as persons who have been outside India for more than 183 days in a year.[5]