The Maintenance and Welfare of Parents and Senior Citizens (Amendment) Bill, 2019 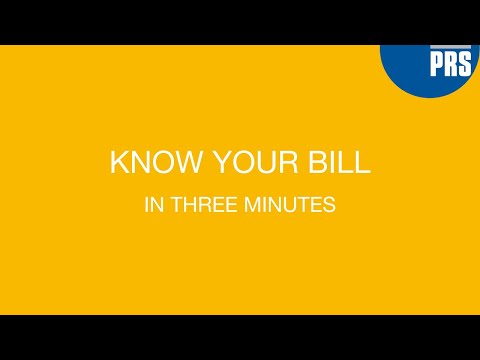 As per the 2011 Census, citizens over the age of 60 years comprise 8.6% of India’s population, and their share of the population is projected to grow to 21% by 2050. [1]    The Maintenance and Welfare of Parents and Senior Citizens Act, 2007 was enacted to provide financial security, welfare and protection for senior citizens.  It requires children to provide maintenance for their parents, and the government to provide old age homes and ensure medical care for senior citizens.  It sets up Administrative Tribunals and Appellate Tribunals to ensure maintenance.

There have been a number of cases related to the Act.  Notably, the Punjab and Haryana High Court examined the Act in detail and requested the central government to re-examine some provisions of the Act that were ambiguous.  The Court also interpreted the Act to say that appeals to the administrative tribunal’s decision may be made by either party, and removed the bar on legal representation. [2]   This Bill amends the 2007 Act to expand the definition of children, relatives and parents, remove the upper limit on the maintenance amount payable to parents by children and relatives, and provide for care-homes and other welfare measures for senior citizens.

Table 1 indicates the key changes proposed by the Bill.

Table 1: Key changes between the Act and Bill

All appeals to maintenance orders may be filed with the Appellate Tribunal which is also presided over by an administrative officer.  Therefore, there is no provision for judicial appeal under the Act.  That is, the only remedy available to a person aggrieved by an order of the Appellate Tribunal would be to file a writ before the High Courts under Article 226 of the Constitution.

Legal practitioners may not represent parties in Tribunal process

[4] The Act states that no party to a proceeding before a tribunal or appellate tribunal can be represented by a legal practitioner.  While the restriction on legal representation may expedite the process and reduce expenses for the parties involved, it contradicts Section 30 of the Advocates Act, 1961 which states that all advocates have a right to practice in: (i) all Courts including the Supreme Court, (ii) before any tribunal or person legally authorised to take evidence, and (iii) before any other authority or person before whom such advocate is entitled to practice.

2 that this Section of the Advocates Act, 1961 came into effect after the 2007 Act was passed by Parliament.  Therefore, the provisions of the Advocate Act, 1961 would prevail, and there cannot be an absolute bar on assistance by legal practitioners in a Maintenance or Appellate Tribunal.Paramjit Kumar Saroya v. Union of IndiaThe Punjab and Haryana High Court noted in its judgement in the case of

Definition of “relative” is ambiguous

Definition of homecare services not specified

The Bill sets requirements for institutions providing homecare services to senior citizens who have difficulties performing activities of daily life due to physical or mental impairments.  These requirements include: (i) hiring trained and certified attendants or caregivers, and (ii) registering with a registration authority set up by the state government.  However, the Bill does not define what would homecare services include.  For example, it is unclear if homecare services would include medical services such as physiotherapy and administering IV drips, or services such as cooking and cleaning.

Further, the Bill requires that institutions providing home care services must hire trained and certified attendants or caregivers.  However, it does not specify or delegate to Rules the certifications and trainings that attendants and caregivers must receive to provide such services.

The Bill requires various provisions under the Bill to be implemented by state governments which would require states to incur the related expenditure.  These provisions include: (i) setting up of care-homes, (ii) creating accessible public facilities for senior citizens, and (iii) regulating private care-homes and homecare services.  The Financial Memorandum of the Bill states that no additional funds will be provided from the Consolidated Fund of India for the implementation of these provisions. [5]   Note that the implementation of the Bill may be affected if state legislatures do not make the requisite fund allocations or do not possess adequate funds to do so.