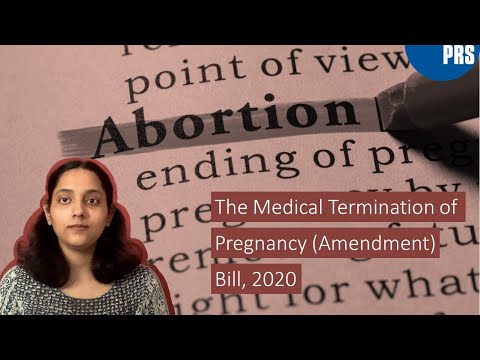 Under the Indian Penal Code, 1860, voluntarily terminating a pregnancy is a criminal offence.[1]  The Medical Termination of Pregnancy Act, 1971 allows for aborting the pregnancy by medical doctors (with specified specialisation) on certain grounds.  A pregnancy maybe be terminated up to 12 weeks based on the opinion of one doctor, and up to 20 weeks based on the opinion of two doctors.  Termination is permitted only when continuance of the pregnancy would involve a risk to the life of the pregnant woman, cause grave injury to her mental or physical health (including rape and failure of birth control measures), or in the case of foetal abnormalities.  Termination is also allowed at any point during the pregnancy if there is an immediate necessity to save the woman’s life.

The Medical Termination of Pregnancy (Amendment) Bill, 2020 was introduced in Lok Sabha on March 2, 2020 and passed on March 17, 2020.  It amends the Act to increase the upper limit for termination from 20 to 24 weeks for certain categories of women, removes this limit in the case of substantial foetal abnormalities, and constitutes Medical Boards at the state-level.  The Statement of Objects and Reasons of the Bill states that several cases have been filed before the Supreme Court and various High Courts seeking permission for aborting pregnancies at stages beyond the 20-weeks limit under the Act, on the grounds of foetal abnormalities or pregnancies due to rape faced by women.[2]  It also states that with the advancement of medical technology, there is a scope to increase the upper limit for terminating pregnancies especially for vulnerable women, and in cases of severe foetal abnormality.

The Bill amends the Medical Termination of Pregnancy Act, 1971.

Table 1: Changes proposed in conditions for terminating a pregnancy at different gestational periods

Note: *Doctor refers to registered medical practitioner with experience/training in gynaecology or obstetrics.

Conditions for termination of pregnancies

Broadly, there are two differing opinions with regard to allowing abortions.  One opinion is that terminating a pregnancy is the choice of the pregnant woman, and a part of her reproductive rights.  The other opinion is that the state has an obligation to protect life, and hence should provide for the protection of the foetus.  Across the world, countries have set varying conditions and time limits for allowing abortions, based on factors such as foetal viability (the point at which the foetus may survive outside the womb), foetal abnormalities, or risk to the pregnant woman.

Many countries allow abortion up to a time limit, along with certain other factors.  For example, in the UK, a pregnancy may be terminated at any time: (i) to protect the life of the woman, (ii) to prevent grave permanent injury to the physical or mental health of the woman, or (iii) if the child is at risk of being seriously handicapped.  Further, when determining the injury to the woman’s physical or mental health, her actual or reasonably foreseeable environment may be considered.[3]  In South Africa, a pregnancy may be terminated up to 12 weeks at the request of the woman, and between 12 to 20 weeks if: (i) it poses a risk to the mental or physical health of the woman, (ii) there is a risk of foetal abnormalities, (iii) it was caused due to rape, or (iv) continuing the pregnancy would affect the socio-economic circumstances of the woman.  It is also permitted beyond 20 weeks if there is a risk to the life of the woman or the foetus, or if there is a risk of foetal abnormalities.[4]

In some countries, such as the US, the law on abortion varies across states.  In 1973, the US Supreme Court had ruled that abortion was legal.[5]  However, some states, such as Alabama, ban abortions in almost all cases unless there is a serious health risk to the mother, or if the foetus has a lethal anomaly.[6]  Some states prohibit abortion after the foetal heartbeat can be detected or as early as six weeks (Georgia, Kentucky).[7],[8]  Some states allow abortions up until 24 weeks (New York) or till the foetus can survive outside the womb (California, Rhode Island), or if there is a risk to the woman’s health or risk of foetal abnormalities.[9],[10],[11]

According to a study, about 67% of the countries in the world (which have a federal law regulating pregnancy) require authorisations by at least one health care provider to undergo an abortion.[12]  The World Health Organisation does not specify any maximum time limit after which a pregnancy should not be terminated.[13]

In India, voluntarily terminating a pregnancy is considered a criminal offence under the Indian Penal Code, 1860 (IPC).1  The Medical Termination of Pregnancy Act, 1971 was enacted as an exception to the IPC, to provide for the termination of certain pregnancies by registered medical practitioners.  The Bill amends the Act to increase the upper limit for termination from 20 to 24 weeks for certain categories of women, and removes this limit in the case of substantial foetal abnormalities.  These provisions raise a few issues which we discuss below:

Medical Board to decide termination only in certain cases

The Statements of Objects and Reasons of the Bill states that several Writ Petitions have been filed before the Supreme Court and various High Courts seeking permission to abort pregnancies beyond 20 weeks in the case of foetal abnormalities or pregnancies due to rape faced by women.2  The Bill allows for termination of pregnancy after 24 weeks only in cases where a Medical Board diagnoses substantial foetal abnormalities.   This implies that for terminating pregnancies due to rape that have crossed the 24-week limit, there is no change in the process: the only recourse is to get permission through a Writ Petition.

The Bill allows for the termination of pregnancy after 24 weeks based on the opinion of the Medical Board in the case of substantial foetal abnormalities.  The Bill does not provide a time frame within which the Board must make its decision.   Termination of pregnancies is a time sensitive matter, and delays in decision-making by the Medical Board may result in further complications for the pregnant woman.

Unclear if transgender persons will be covered

The Act and the Bill allow “pregnant women” to terminate pregnancies under certain conditions.  Note that the Transgender Persons (Protections and Rights) Act, 2019 recognises transgender as an additional gender in India.[14]  Some medical studies have shown that there may be cases where persons who identify as transgender (and not women) can become pregnant even after receiving hormone therapy to transition from female to male, and may require termination services.[15]  Since the Act and the Bill only provide for termination of pregnancies in the case of women, it is unclear if transgender persons will be covered under the Bill.

The Statement of Objects and Reasons of the Bill states that there is a need to increase women’s access to legal and safe abortion services to reduce maternal mortality and morbidity caused by unsafe abortions and associated complications.2  The All-India Rural Health Statistics (2018-19) indicates there are 1,351 gynaecologists and obstetricians in community health clinics in rural areas across India, and the shortfall is 4,002, i.e., there is a 75% shortage of qualified doctors.[16]  The shortage of qualified medical professionals may continue to limit the access of women to safe abortion services.  Note that as per the National Health and Family Survey (2015-16), only 53% of abortions are performed by a registered medical doctor and the balance are conducted by a nurse, auxiliary nurse midwife, dai, family member, or self.[17]

[8]. AN ACT relating to abortion and declaring an emergency, Senate Bill 9, Kentucky, https://apps.legislature.ky.gov/recorddocuments/bill/19RS/sb9/bill.pdf.