Impact of COVID-19 on the Power Sector

The central government has enforced a nation-wide lockdown between March 25 and May 3 as part of its measures to contain the spread of COVID-19.  During the lockdown, several restrictions have been placed on the movement of individuals and economic activities have come to a halt barring the activities related to essential goods and services. The restrictions are being relaxed in less affected areas in a limited manner since April 20.  In this blog, we look at how the lockdown has impacted the demand and supply of electricity and what possible repercussions its prolonged effect may have on the power sector.

As electricity cannot be stored in large amount, the power generation and supply for a given day are planned based on the forecast for demand.  The months of January and February in 2020 had seen an increase of 3% and 7% in power supply, respectively as compared to 2019 (year-on-year).  In comparison, the power supply saw a decrease of 3% between March 1 and March 24.  During the lockdown between March 24 and April 19, the total power supply saw a decrease of about 25% (year-on-year).

If we look at the consumption pattern by consumer category, in 2018-19, 41% of total electricity consumption was for industrial purposes, followed by 25% for domestic and 18% for agricultural purposes.  As the lockdown has severely reduced the industrial and commercial activities in the country, these segments would have seen a considerable decline in demand for electricity. However, note that the domestic demand may have seen an uptick as people are staying indoors. 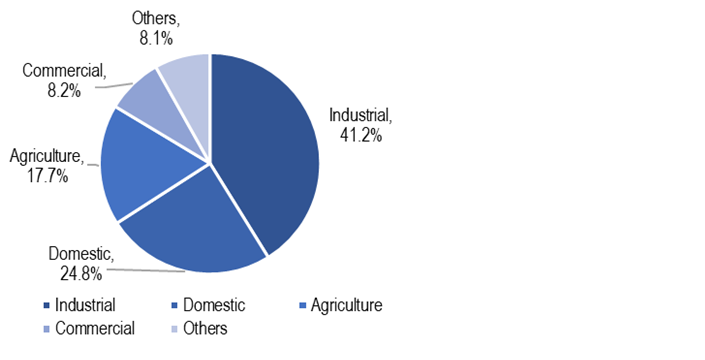 Electricity demand may continue to be subdued over the next few months. At this point, it is unclear that when lockdown restrictions are eased, how soon will economic activities return to pre COVID-19 levels. India’s growth projections also highlight a slowdown in the economy in 2020 which will further impact the demand for electricity.  On April 16, the International Monetary Fund has slashed its projection for India’s GDP growth in 2020 from 5.8% to 1.9%.

A nominal increase in energy and peak deficit levels

As power sector related operations have been classified as essential services, the plant operations and availability of fuel (primarily coal) have not been significantly constrained. This can be observed with the energy deficit and peak deficit levels during the lockdown period which have remained at a nominal level.  Energy deficit indicates the shortfall in energy supply against the demand during the day.  The average energy deficit between March 25 and April 19 has been 0.42% while the corresponding figure was 0.33% between March 1 and March 24. Similarly, the average peak deficit between March 25 and April 19 has been 0.56% as compared to 0.41% between March 1 and March 24.  Peak deficit indicates the shortfall in supply against demand during highest consumption period in a day.

Coal is the primary source of power generation in the country (~71% in March 2020).  During the lockdown period, the coal stock with coal power plants has seen an increase.  As of April 19, total coal-stock with the power plants in the country (in days) has risen to 29 days as compared to 24 days on March 24. This indicates that the supply of coal has not been constrained during the lockdown, at least to the extent of meeting the requirements of power plants.

This shift may be happening due to various reasons including: (i) renewable energy sources (solar, wind, and small hydro) have MUST RUN status, i.e., the power generated by them has to be given the highest priority by distribution companies, and (ii) running cost of renewable power plants is lower as compared to thermal power plants.

This suggests that if growth in electricity demand were to remain weak, the adverse impact on the coal power plants could be more as compared to other power generation sources.  This will also translate into weak demand for coal in the country as almost 87% of the domestic coal production is used by the power sector.  Note that the plant load factor (PLF) of the thermal power plants has seen a considerable decline over the years, decreasing from 77.5% in 2009-10 to 56.4% in 2019-20. Low PLF implies that coal plants have been lying idle.  Coal power plants require significant fixed costs, and they incur such costs even when the plant is lying idle. The declining capacity utilisation augmented by a weaker demand will undermine the financial viability of these plants further.

Finances of the power sector to be severely impacted

Power distribution companies (discoms) buy power from generation companies and supply it to consumers.  In India, most of the discoms are state-owned utilities.  One of the key concerns in the Indian power sector has been the poor financial health of its discoms.  The discoms have had high levels of debt and have been running losses. The debt problem was partly addressed under the UDAY scheme as state governments took over 75% of the debt of state-run discoms (around 2.1 lakh crore in two years 2015-16 and 2016-17).  However, discoms have continued to register losses owing to underpricing of electricity tariff for some consumer segments, and other forms of technical and commercial losses.  Outstanding dues of discoms towards power generation companies have also been increasing, indicating financial stress in some discoms. At the end of February 2020, the total outstanding dues of discoms to generation companies stood at Rs 92,602 crore.

Due to the lockdown and its further impact in the near term, the financial situation of discoms is likely to be aggravated. This will also impact other entities in the value chain including generation companies and their fuel suppliers. This may lead to reduced availability of working capital for these entities and an increase in the risk of NPAs in the sector.  Note that, as of February 2020, the power sector has the largest share in the deployment of domestic bank credit among industries (Rs 5.4 lakh crore, 19.3% of total).

Following are some of the factors which have impacted the financial situation during the lockdown:

Capacity addition may be adversely impacted

As per the National Electricity Plan,  India’s total capacity addition target is around 176 GW for 2017-2022.  This comprises of 118 GW from renewable sources, 6.8 GW from hydro sources, and 6.4 GW from coal (apart from 47.8 GW of coal-based power projects already in various stages of production as of January 2018).

Due to the impact of COVID-19, the capacity addition targets for various sources is likely to be adversely impacted in the short run as:

Key reforms likely to be delayed

Following are some of the important reforms anticipated in 2020-21 which may get delayed due to the developing situation:

The Uttarakhand Assembly concluded a two-day session on November 30, 2022.  The session was scheduled to be held over five days.  In this post we look at the legislative business that was carried out in the Assembly, and the state of state legislatures.

13 Bills were introduced and passed within two days

The Assembly had proposed to discuss and pass each Bill (barring two) within five minutes (see Figure 1).  Two Bills were allocated 20 minutes each for discussion and passing - the Haridwar Universities Bill, 2022, and the Public Service (Horizontal Reservation for Women) Bill, 2022.  As per news reports, the Assembly passed all 13 Bills within these two days (this excludes the Appropriation Bills).  This raises the question on the amount of scrutiny that these Bills were subject to, and the quality of such laws when the legislature intends to pass them within mere minutes.

Our law-making institutions have several tools at their disposal to ensure that before a law is passed, it has been examined thoroughly on various aspects such as constitutionality, clarity, financial and technical capacity of the state to implement provisions, among others.  The Ministry/Department piloting a Bill could share a draft of the Bill for public feedback (pre-legislative scrutiny).  While Bills get introduced, members may raise issues on constitutionality of the proposed law.  Once introduced, Bills could be sent to legislative committees for greater scrutiny.   This allows legislators to deliberate upon individual provisions in depth, understand if there may be constitutional challenges or other issues with any provision.  This also allows experts and affected stakeholders to weigh in on the provisions, highlight issues, and help strengthen the law.

However, when Bills are introduced and passed within mere minutes, it barely gives legislators the time to go through the provisions and mull over implications, issues, or ways to improve the law for affected parties.  It also raises the question of what the intention of the legislature is when passing laws in a hurry without any discussion.  Often, such poorly thought laws are also challenged in Courts.

For instance, the Uttarakhand Assembly passed the Uttarakhand Freedom of Religion (Amendment) Bill, 2022 in this session (five minutes had been allocated for the discussion and passing of the Bill).  The 2022 Bill amends the 2018 Act which prohibits forceful religious conversions, and provides that conversion through allurement or marriage will be unlawful.  The Bill has provisions such as requiring an additional notice to be sent to the District Magistrate (DM) for a conversion, and that reconversion to one’s immediate previous religion will not be considered a conversion.  Some of these provisions seem similar to other laws that were passed by states and have been struck down by or have been challenged in Courts.  For example, the Madhya Pradesh High Court while examining the Madhya Pradesh Freedom of Religion Act, 2021 noted that providing a notice to the DM for a conversion of religion violates the right to privacy as the right includes the right to remain silent.  It extends that understanding to the right to decide on one’s faith.  The Himachal Pradesh Freedom of Religion Act, 2006 exempted people who reconvert to their original religion from giving a public notice of such conversion.  The Himachal Pradesh High Court had struck down this provision as discriminatory and violative of the right to equality.  The Court also noted that the right to change one’s belief cannot be taken away for maintaining public order.

Uttarakhand MLAs may not have had an opportunity to think about how issues flagged by Courts may be addressed in a law that regulates religious conversions.

Most other state Assemblies also pass Bills without adequate scrutiny

In 2021 44% states passed Bills on the day it was introduced or on the next day.  Between January 2018 and September 2022, the Gujarat Assembly introduced 92 Bills (excluding Appropriation Bills).  91 of these were passed in the same day as their introduction.  In the 2022 Monsoon Session, the Goa Assembly passed 28 Bills in the span of two days.   This is in addition to discussion and voting on budgetary allocation to various government departments.

Figure 2: Time taken by state legislatures to pass Bills in 2021

Note: The chart above does not include Arunachal Pradesh and Sikkim. A Bill is considered passed within a day if it was passed on the day of introduction or on the next day. For states with bicameral legislatures, bills have to be passed in both Houses. This has been taken into account in the above chart for five states having Legislative Councils, except Bihar (information was not available for Council).
Sources: Assembly websites, E-Gazette of various states and Right to Information requests; PRS.

Occasionally, the time actually spent deliberating upon a Bill is lesser than the allocated time.   This may be due to disruptions in the House.  The Himachal Pradesh Assembly provides data on the time actually spent discussing Bills.   For example, in the August 2022 Session, it spent an average of 12 minutes to discuss and pass 10 Bills.  However, the Uttarakhand Assembly allocated only five minutes to discuss each Bill in its November 2022 Session.  This indicates the lack of intent of certain state legislatures to improve their functioning.