About six months ago, the government introduced a Bill in the Indian Parliament that seeks to make changes to the Maternity Benefits Act, 1961. The law requires employers to provide women employees with maternity leave of up to 12 weeks, with full wages.  The proposed Bill raises this period of maternity leave to 26 weeks. The Bill is scheduled for debate in Parliament in the coming weeks.

The need for maternity leave to extend to a period of 24 weeks has been recommended by various experts on maternal and child health.  As of 2015, data indicates that in India, in a given year, about 40 infants out of 1,000 live births die before reaching one year of age, well above the global average of 32 deaths per 1000.   One of the challenges in achieving wellbeing and healthy development of mother and child lies in access to adequate nutrition and quality health care.  The World Health Organisation recommends exclusive breastfeeding for the first 24 weeks, in order to improve infant survival rates, and encourage the healthy development of both mother and child.  However, it can be argued that the ability of women to nurse and take care of an infant is determined by the extent to which they have income security for the period of maternity.  There is evidence that absence of paid maternity leave either leads to women dropping out of the workforce, or poor nutrition and health indicators of infants.  On this account, it could be argued that the objective of the Bill to extend maternity leave to 26 weeks could address maternal and child health.

However, the legislative proposal placed before Parliament eludes a key policy question – whether maternal and child health is considered a public good?  Given that the healthier infants and their mothers are, the better are the chances of creating a healthy and productive population and workforce, it is difficult to deny the public good question.  Therefore, would it then be appropriate that maternity leave as a social security measure be provided and financed by the government, or private enterprises?  The Maternity Benefit Act, 1961 places the burden of providing paid maternity leave squarely on employers.  Given that the Bill increases maternity leave from 12 weeks to 26 weeks, the increase in costs on the employer could be detrimental to women in the workforce.  With the coming of the new law, to the extent possible, employers may prefer hiring male workers in order to remain viable businesses.

There is, therefore, a need to explore a different model for financing maternity leave, on which does not place the obligation exclusively on employers.  The table below compares how different countries have addressed the provision of maternity benefits.  For example, the UK provides maternity leave for up to 52 weeks, which is financed by the government and employers.  The percentages of wages paid during the period are calibrated over the 52 week period.  Brazil on the other hand pays 100% wage during the maternity leave which is financed by contributions from the employee, employer and government. 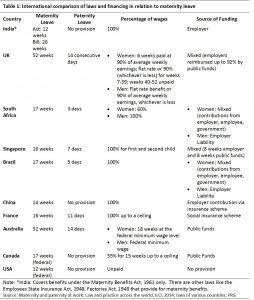 Table 1: International comparison of laws and financing in relation to maternity leave (Click to enlarge image)

Another challenge of the proposed Bill is that it covers approximately 1.8 million women workers, which implies that 90% of the women workforce who work in the unorganised sectors are not covered by the law.  Women working in the unorganised sector include domestic workers, agricultural workers, and construction workers who may have multiple employers and work in an unstructured environment.  For such women income security continues to be a challenge, which makes it nearly impossible to take a break in employment to take care of their infant and of themselves.  The government has launched the Indira Gandhi Matritva Sahyog scheme to provide such women with a lump sum payment of Rs. 6,000. Unfortunately, this amount does not go a long way in covering loss of income.

It is important that policy makers evaluate legislative proposals from the lens of what financing model will work well and how incentives are aligned such that all stakeholders comply with the law and further its objective. Otherwise, the proposed Maternity Benefit Bill may be rather short-sighted and counterproductive.