Five years have passed since the enactment of the Insolvency and Bankruptcy Code, 2016 (IBC). The code provides for time-bound resolution of insolvency among companies and individuals.

The provisions relating to individual insolvency resolution, however, have not yet been operationalised, except for personal guarantors.

The Bankruptcy Law Reforms Committee (2015) had observed that earlier frameworks saw significant delays in insolvency resolution. This was due to reasons such as (i) overlapping jurisdiction of laws, (ii) lack of clarity in their provisions, and (iii) long time taken in delivering judgments due to multiple reasons including lack of capacity of courts.

The committee set the following key objectives for the new code for insolvency resolution: (i) low time to resolution, and (ii) low loss in recovery.

In this article, we look at the functioning of the corporate insolvency resolution process (CIRP) under the IBC over these five years. (Note that the filing of CIRP was prohibited for defaults occurring during the one-year period from March 25, 2020, in view of the COVID-19 pandemic)

Adherence to timeline for completion of CIRP could be a concern

As of March 2021, a total of 4,376 CIRP applications have been admitted. Of these, 1,723 applications (39 percent) are yet to be closed. Seventy-nine percent of these ongoing CIRPs have continued for more than 270 days. Majority of completed CIRPs have resulted in liquidation

CIRP may result in either approval of a resolution plan or an order for liquidation. It may also be closed prematurely by mutual settlement between debtors and creditors, or withdrawal of the application by the initiator.

The Bankruptcy Law Reforms Committee (2015) had observed that there may be situations in which a viable mechanism may be found by which a defaulting corporate debtor is protected as a going concern.

It observed that if this could be done, the cost imposed upon society would go down as liquidation involves the destruction of the organisational value of the debtor.

Also Read: For banks, promoter guarantees could well be a mirage

As of March 2021, of 2,653 closed cases, about 39 percent cases were closed by settlement or withdrawal, 48 percent resulted in liquidation, and about 13 percent yielded a resolution plan.

Reasons for commencement of liquidation included: (i) decision by the committee of creditors to go for liquidation (57 percent), (ii) no resolution plan received (39 percent). 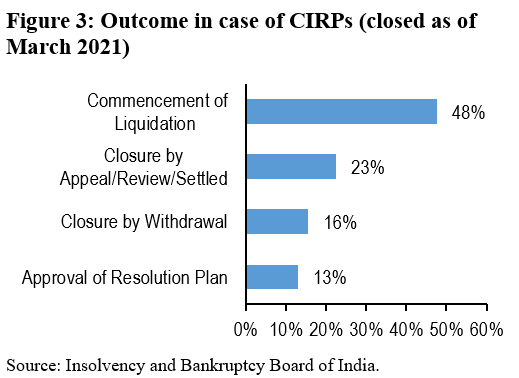 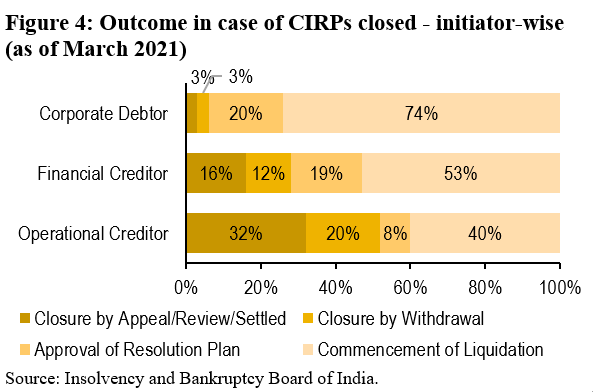 The Insolvency and Bankruptcy Board of India (IBBI) noted that a high number of closed cases belonged to corporate debtors who were either undergoing proceedings under the Board for Industrial and Financial Reconstruction (BIFR) or were already defunct.

The board noted that these corporate debtors had assets valued at less than 5 percent of the outstanding debt amount on average. Hence, if such cases are excluded, the percentage of cases yielding a resolution plan improves. 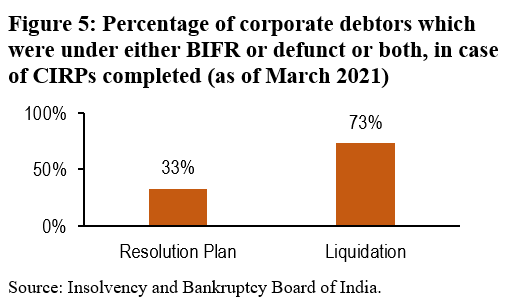 Rescue of assets and recovery of values

Another parameter to look at the performance of the code is in terms of value realised for creditors.

In 348 cases where the resolution plan was approved, the debtors owed Rs 5.67 lakh crore on aggregate. Out of this, creditors could recover Rs 2.09 lakh crore (37 percent). IBBI noted that the value of assets of these 348 corporate debtors was only Rs 1.11 lakh crore when they entered CIRP.

In June 2017, the Reserve Bank of India (RBI) directed banks to initiate CIRP in case of 12 defaulting companies including Bhushan Steel, Essar Steel, and Jaypee Infratech (referred to as Twelve Large Accounts).

Out of these, the resolution plan has been approved for eight debtors, two are still undergoing CIRP, and liquidation has been ordered in the case of the other two as of March 2021.