The overall trends in railway finances

Finance Minister Nirmala Sitharaman presented the railways' finances along with the Union Budget on February 1, 2021. Earlier this week, both Houses of Parliament discussed the working of the Railways Ministry and the budgetary allocations to the Ministry. In light of this, we discuss some issues that the transporter has been facing with regard to financing:

Over the last few years, Railways has been struggling to generate its own revenue. The growth rate of Railways’ earnings from its core business of running freight and passenger trains has been declining. This is due to a decline in the growth of both freight and passenger traffic. Railways is also steadily losing traffic share to other modes of transport. The share of Railways in total freight traffic has declined from 89 percent in 1950-51 to 27 percent in 2020. NITI Aayog (2018) had highlighted the shortfall in carrying capacity and lack of price competitiveness as some of the reasons for the decline in freight share.

One of the reasons Railways freight rates are high is that freight cross-subsidises its passenger operations. In 2017-18, passenger and coaching services incurred losses of Rs 46,025 crore, whereas freight made a profit of Rs 45,923 crore. Hence, all the profit earned from freight operations was utilised to compensate for the loss from passenger and other coaching services. The total passenger revenue during this period was Rs 48,643 crore. This implies that losses in the passenger business were about 95 percent of its revenue. Therefore, in 2017-18, for every one rupee earned from its passenger business, Indian Railways ended up spending Rs 1.95.

On the other hand, Railways’ expenditure on salaries has been gradually increasing with a significant jump every few years due to Pay Commission revisions. There is increasing expenditure on pension too, which is unproductive, as this does not generate any revenue for the Railways. Staff wages and pension constitute about 70 percent of the Railways’ estimated revenue expenditure in 2021-22. For 2021-22, the expenditure on staff is estimated at Rs 93,676 crore, which is an annual increase of 4 percent over 2019-20. The pension bill may increase further in the next few years, as about 40 percent of the Railways staff was above the age of 50 years in 2016-17.

High revenue expenditure and declining revenue generation have affected the operational surplus the transporter is able to generate. Railways’ operating ratio (ratio of the working expenditure to the revenue earned from the traffic) has consistently been higher than 90 percent in the past several years. 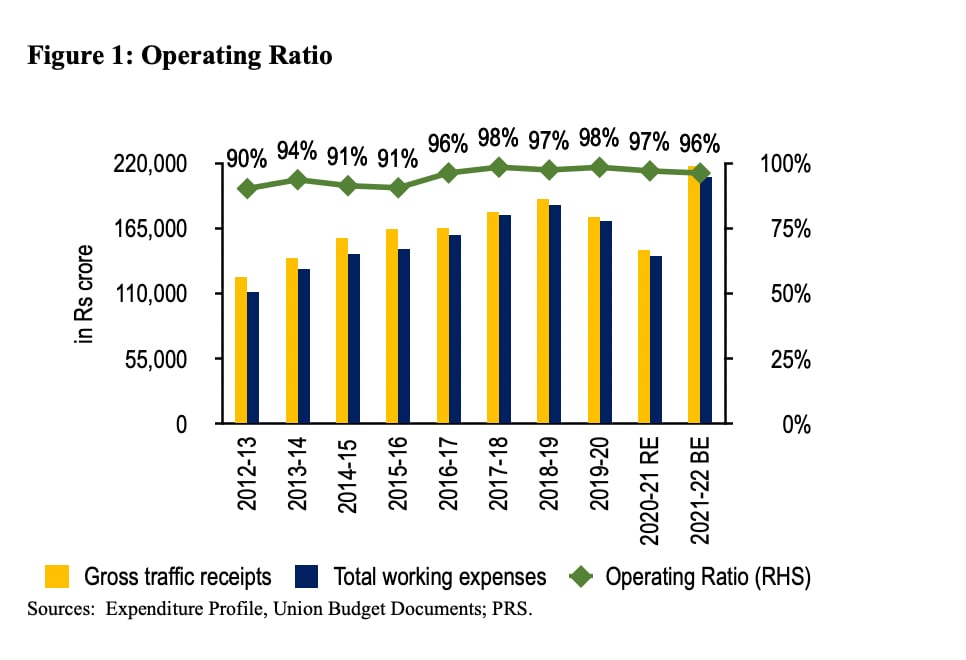 Consequently, Railways has been funding its capex through budgetary support from the central government and borrowings. Until recently, this budgetary support from the central government used to be the primary source of funds for capex for Railways. However, since 2015-16, an increasingly higher proportion of the capital expenditure is being met through extra-budgetary resources (or borrowings). Increased reliance on borrowings could further exacerbate the financial situation of Railways. 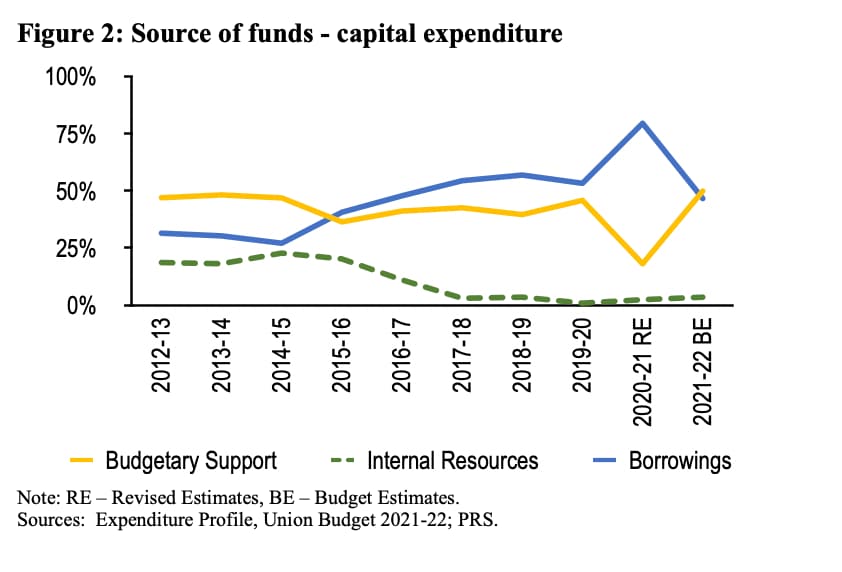 Poor finances also affect Railways’ ability to allocate money to some of the key funds it manages. For example, appropriation to the Depreciation Reserve Fund (DRF) is intended to finance the costs of new assets replacing old ones. In 2021-22, appropriation to DRF is estimated at Rs 800 crore. In the last few years, appropriation to DRF has declined. As per CAG (2020), at the end of 2018-19, the value of over-aged assets pending for replacement using this fund was estimated to be Rs 96,403 crore. The Ministry of Railways has noted that the decline in appropriation to DRF is due to a major part of renewal and replacement works having safety implications being financed through Rashtriya Rail Sanraksha Kosh (RRSK), and that beyond 2021-22, all renewal and replacement works will be financed from DRF. However, the actual appropriation to RRSK also has been less than the requirement in all three years between 2018-19 and 2020-21. In 2021-22, Railways has allocated Rs 5,000 crore towards RRSK.

Impact of COVID-19 on Railways revenue

During the initial phase of the national lockdown (March-April 2020), passenger services were completely suspended. Services have since resumed to some extent, however, are yet to return to the pre-COVID level. In 2020-21, passenger traffic volume is estimated to decline by 87 percent over the previous year.

Freight trains were running almost throughout the entire period and could run efficiently as the rail network was congestion-free due to the lack of passenger trains. However, due to a decline in the economic activities during April-June 2020, the demand for freight services may also have been impacted. In 2020-21, the freight traffic volume is estimated to decline by 7 percent as compared to 2019-20, as against an increase of 3 percent estimated at the budget stage.

Most of the decrease in revenue expenditure is due to lower appropriation to the pension fund. Against the budget estimate of Rs 53,160 crore, the fund has been allocated Rs 523 crore at the revised stage (99 percent less). If appropriation were to be as per the requirement, the operating ratio will worsen to 131.5 percent.

With declining revenue and increasing expenditure, Railways has little room left to improve on its services. Central government support in 2020-21 saw a shift with some of the support coming in the form of a loan. Railways’ dependence on borrowings has also been increasing, which experts have suggested may not be a sustainable way to fund its infrastructure growth. With this backdrop and Railways’ plan of expanding its infrastructure, it remains to be seen how the national transporter will implement its growth trajectory.

Prachee Mishra is the Deputy Head of Research at PRS Legislative and Saket Surya is an analyst on the research team at PRS. The views expressed are personal