Why Decline in Sittings of the Parliament & Assemblies Is Worrying

State legislatures usually convene for a session three times a year that is, the Budget, Monsoon and Winter sessions. In India, the state legislatures meet for an average of 26 days a year. Of these 26, a majority of the sitting days are during the budget session. 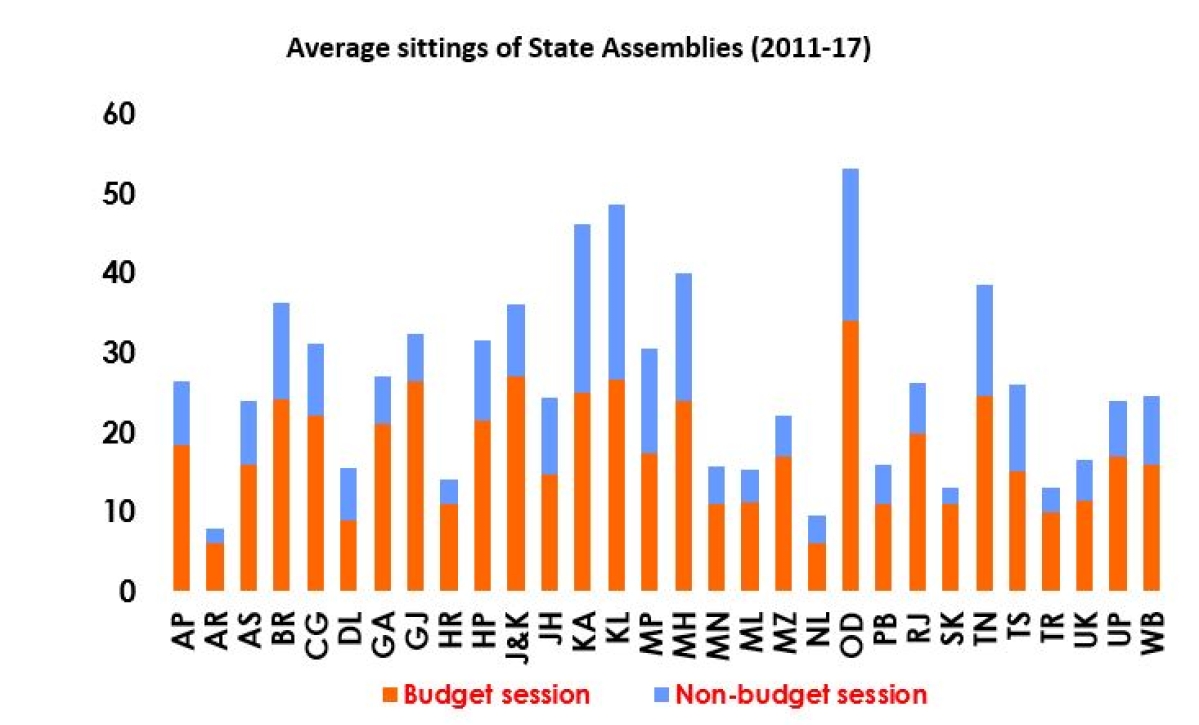 Why Are Sittings of An Assembly a Concern?

Legislatures are primarily responsible for passing laws and approving budgets. The legislatures, through various mechanisms, act as an overseeing body on the work of the executive (government). Fewer sittings of the assembly adversely impact its responsibility of scrutiny.

For example, the government introduces various bills for passage in the legislature. These bills have an impact on the governance, and lives of citizens. Due to lack of adequate sittings, the members do not have sufficient time to prepare for the deliberation on bills, and several of them are passed without much discussion.

In the case of Uttar Pradesh, in the four years from 2014-17, close to 60 percent of the bills have been passed within a day of their introduction.​

Similarly, the legislature is also responsible for scrutinising budgetary proposals before approving them. Budgets of many departments have been passed withoutdetailed discussion due to fewer sittings.

It must be noted that, even Parliament sittings have declined over the years. However, the Parliament also has an active standing committee system. These committees deliberate on a range of issues related to specific ministries, and scrutinise legislation. Such a committee system is either absent in most state legislatures or remain inactive.

How Often Should the State Assemblies Meet?

Article 174 of the Indian Constitution only specifies that the gap between two sittings of the state legislatures should not be more than six months.

However, it does not prescribe any number of sitting days for the legislatures.​

At the time of writing this piece, the Rajya Sabha is deliberating on a private member bill making it mandatory for Parliament to sit for 100 days.​

Legislature Has No Power Over Its Sittings

Moreover, it is useful to have a fixed calendar for sittings of the legislature so that other political developments do not affect its functioning. This practice is followed in countries like United Kingdom, Canada, and Australia. Hence, with lesser sittings, it becomes more important that the assembly remains productive whenever it is in session.

What Else Affects Functioning of the Legislature?

This brings us to another aspect of legislatures that affects its functioning — disruptions.

Even during the few days that the assemblies meet, disruptions further reduce the time spent on deliberation on important issues of the state.

In the brief winter session of the UP assembly, the house was adjourned on the first day due to the death of a sitting member, while the other two days saw frequent disruptions. ​

During this time, a supplementary budget of 8,000 crores was approved in the assembly. While the suspension of members disrupting the house is an option available under the rules, it is a tool very judiciously exercised in most state assemblies and Parliament. The speaker of the UP assembly, at a recent public lecture, suggested that a special discussion to introspect on reasons for disruptions might be useful to find an amicable resolution to frequent disruptions.

Over the years, the states have become the focal point of implementation of schemes apart from more devolution of funds from the Centre. Hence, it is necessary for legislatures to meet more frequently to examine the work of the government.

(Abhijit Banare is a program officer at the non-profit organisation PRS Legislative Research, and is responsible for outreach to state legislators and citizen engagement platforms. He tweets at @AbhijitBanare . This is an opinion piece and the views expressed are the author’s own. The Quint neither endorses nor is responsible for them.)